First 100 mls with Chris and 2 Valium

I was told to have someone drive me to my first fill so I had scheduled the fill as early as possible so Chris could take me.

The night before I had under 4 hours of sleep, but I still took 2 Valium, it made me dopey enough to not care too much. I was told they would probably start with 50 ml in each one, so I was prepared for that. When I arrived the nurse said “Ready for 100ml?”
“Er, I thought you start with 50 ml.”
“It’s whatever you can cope with.”
So we started and she kept asking if I was okay, by the time I asked what volume we were up to she was at 70 ml. So I ended up with 100 ml in each boob.

I cried when I looked down, with tissue expander, a little swelling, some muscle and 100ml of saline, I was a respectable A cup. I put my top back on and almost felt normal. I had very little discomfort when I sat up or walked back to the car. I was a little weepy because I couldn’t believe this is what I looked like 23 days after surgery. I knew I was months out from implants and nipple reconstruction, but for now I could fake it and start to feel normal again. 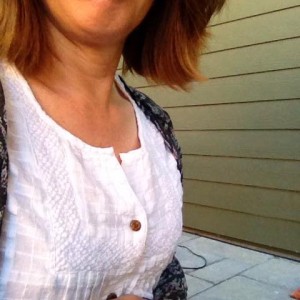 This was so much different from the radical diagonal mutilation mastectomy my mother rejected in the 90s.

The 100 ml fill energized me.  I walked over 12,000 steps the next day (over 5 miles) and didn’t feel like I over did it. I couldn’t believe it was only 24 days since surgery. I also baked for the first time and it made me so happy.

This was pretty uneventful. I had done my stretching exercises about every 2 days over the 2 week wait. The skin and muscle did not feel tight so I was pretty sure I could take a 100 mls.  It was fairly easy and I didn’t feel too bad afterwards.

I confirmed with the nurse that they had put 100 mls in the expanders at my surgery, so I was up to 300 mls total. The Hubs thought I looked great, and I did look almost normal.  I then spent the next 2 weeks deciding if I should add another 50 mls, or 100 mls. I was surprised by how much this decision tormented me.  I didn’t want to go too big, but I didn’t want to short change myself.

The tissue expanders are filled with saline and they are hard.  The shape fills the expander and does not look or feel like a breast.  I tried on bras and tried to work out where I was in relation to the original girls, but nothing really convinced me either way.

I was also having an issue with being called a cancer survivor.  I didn’t have to go through chemotherapy, radiation or Tamoxifen for 5 years.  I really didn’t have to “fight” cancer like so many people do.  Granted I got the call “you have cancer” but it’s not the same. I haven’t lost my hair, I haven’t felt sick and weak for days on end.  My fight was different.  I made the strategical decision to have a mastectomy and amputate everything around the cancer.  I didn’t fight on the ground, I bombed the hell out of it.

I saw this book on Amazon From Zero to Mastectomy, and read it in two days.  It helped a little. It was about a woman who had stage zero breast cancer and had a single mastectomy. She addressed the ‘survivor’ label and said that mastectomy is no walk in the park. She survived cancer by having a mastectomy. Okay, that’s me too.

The nurse started adding the saline in 10 ml pushes.  She didn’t ask what I wanted, she just assumed I was going for 100 ml. Some how I had just gone through the motions too and here I was being pumped up.  I asked, if she knew how much they took out. And, if I go too large can a smaller implant be used to correct it. She asked me to be quiet because she didn’t want to lose her count on the 10 ml pushes.  She stopped at 100 ml; my breast felt tight and hard.

The damage was already done, so I let her put 100 ml in the other breast.  When I sat up I could hardly breath. The expanders were pushing into my arms. I kept taking short deep breaths to get air.  Holy crap, what just happened.

The nurse told me to sit and relax while she checked with pathology to find out what volume was taken out. It was 349 and 352, about 350 ml from each. I panicked that I had grown a bigger pair than I should have. She told me it was okay because the implants will look about 15% smaller, and (if I want to go smaller) they can under fill and put in something like a 380 ml. There are also a lot of other options with shape and diameter, so I felt a little better about it.

Insurance states I can’t have another consult until 90 days after surgery, which will be October 7th my mother’s birthday. I couldn’t get an appointment on the 7th, so I made an appointment with  Dr Capraro for October 8th 2015.

Driving home was a little challenging with the hard balloons under my arms and I had to breath in hard to take a breath. I took the usual naked and dressed photos.  I felt huge, but I did not look ridiculously huge with clothes on. I took a percoet for the pain, and a valium that night to help me sleep.

The next day, I lay in bed for a while. I couldn’t believe what I had got myself into.  I had made a big mistake going to 400 ml (you’re not going for the Dolly Parton look, what were you thinking Mandy?).

The good thing is I did not hurt. I still needed to restart the stretching exercises, but normal movement was painless, and I could almost take a deep breath normally. I decided to try on clothes and take a few photos to see how grossly disproportional I was.

Apparently looking down on ones boobs is completely different from seeing them from afar, or side profile.  I think my stomach sticks out more than my boobs.  May be 400 ml is okay. I will just need to hang out with them and see if I get used to the size.