Is the cat out of the bag?  Has the dog escaped?

I woke up early and tried to calm myself before I went off on a surreal thought where I would stand outside my body and look back at myself and say “Can you frikkin believe this? I have cancer just like my mother!  This wasn’t supposed to happen. What would she think, she’d be so upset. I’m almost the same age she was when she was diagnosed, and she died 6 years later. Holy Crap, am I going to die too?”  My mother had died almost 20 years ago and I had worn her wedding ring on my right hand. I look like her, I can hear myself saying things like she would say.  I loved my mother, but at this moment in time I needed to follow my own destiny, I needed to be me.  I took my mothers ring off and put it in my jewelry box. I felt a little naked, but I also felt a release a freedom,  Removing the ring had somehow liberated me. This was going to be Mandy’s story and it was going to be different and today I was going to start the week off with Pancakes! 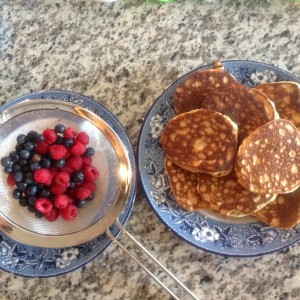 My PCP Dr. Keller had given me some suggestions for Surgeons, Plastic Surgeons and Oncologists – I would need all 3.  I was surprised that I was the one responsible for finding them.  How am I qualified to find all these doctors?  I selected a few that looked as if they had experience and made appointments.

The surgical consult was with Dr. Barbara Schwartzberg; Chris my husband came with me.  When I had made the appointment their office had asked me to bring all my recent mammograms, biopsy images, pathology results and MRI results from the Women’s Imaging Center.  I picked up  large envelope on Friday June 5, 2015

Of course I copied everything. Looking at the materials I realized how important a good radiologist is.  They are the ones that seek out abnormalities and make the diagnosis. The better the radiologist, the earlier the diagnosis? I don’t know.  I was impressed with Dr. McAleese’s enthusiasm and almost excitement when she showed me the calcified ducts on the lighbox.  “See this” she said pointing to one of the stars in the solar system that was my mammogram. “I want to biopsy that.”

The surgeons office was pleasant and the individual rooms had posters from Breast Cancer conferences where she had spoken.  To me that was a good sign, I appreciate medical doctors that are on top of their field and haven’t stopped learning.  I guess I have seen too many jaded family doctors that just want to give you an antibiotic, pain killer or advice so you will go away.

Dr Schwartzberg looked at the documents and  MRI disc images that showed the cancer had most likely not spread. Of course they couldn’t be sure, but things did look good.  Chris asked about DCIS (in-situ) verses Invasive Ductal Carcinoma (IDC). The assumption moving forward was I had DCIS, everything had been caught really early. I was very lucky this had a 90% cure rate. She talked about my options;

I think I stopped Dr. Schwartzberg half way through her description of option number 1 and just blurted out “I want a double mastectomy!”  She smiled and half nodded her head as she told me she thought that would be my choice. She mentioned a few things I hadn’t realized. With a double mastectomy I wouldn’t need radiation or Tamoxifen and it’s side effects. With a double it’s easier to get them even (matching a natural and reconstructed boob can be tricky).  With a double both boobs will age at the same rate, they’ll both be much more perky that natural boobs. Also, the reconstruction starts during the mastectomy. I would recover with tissue expanders.

I had an option to save my nipples.  That was almost too much to deal with at that time. I was still getting over the promise I had made to myself to have the girls removed if any cancer was ever found.  Nipples would be biopsied and if they were clear would be reattached, but there is a slight increase in cancer with that choice…the choices were all a numbers game, with 3 being the safest and most conservative option (sans nipples). I didn’t have to make the decision that day.

I asked Dr. Schwarztberg who she had worked with in the past (I wanted a team she had worked with and was comfortable working with).  She mentioned Dr. Capraro, he was also one of the plastic surgeons my PCP had suggested. I had a appointment with him next!

Dr Schwartzbergs office also had a nurse to help with scheduling and who I could ask questions if anything came up.  I asked about surgery read and they suggested I go to pre-hab so I could get a better idea or exercises and do some strengthening exercises before surgery.  When I left the office we hugged. I felt happy and confident that I had found a good surgeon.  One down two to go!

The appointment was midmorning so when we left it was almost lunchtime. With cancer, if you expect the worst, but when you hear promising news it is an amazing lift to your mindset.  I almost didn’t want to believe that Dr Schwartzberg really thought there was a good chance the cancer had not spread (but would confirm with lymph node biopsy).  To be honest, I could never completely relax until I saw a pathology report, but today’s meeting was a very uplifting one. As we walked out of the building we decided to go for lunch. The weather was perfect, we sat outside in the warm sun and ate tacos. I even had an adult beverage!