Next! A plastic surgeon.

I looked online  for plastic surgeons that specialize in breast reconstruction in my area.  They all sort of explained the procedure options. Some had before and after pictures, but there was nothing that really set anyone apart.

I found myself looking at Dr Capraro’s site.  He’s in a practice with another Plastic Surgeon who does the more classical plastic surgery procedures. The practice also has an office in Hollywood. I thought that was funny, but then though may be they’re really good because they have an office in the plastic surgery center of the universe; Hollywood!

I arrived at Dr Capraro’s office 15 minutes early. This office was not like the other ones I had been to recently.  There was a calm spa-like feel to the reception, beautiful white flowers bookended the desk, and practically everyone was a beautiful blonde.

I was immediately taken to a room where, surprise, surprise I was requested to get topless.  The room had a camera and a blue screen.  I though that was pretty presumptuous considering I was just going for a consult…I had’t decided if Dr Capraro could be my Plastic Surgeon yet.  I went with the flow and had my “before” boob photos taken. I got dressed while the photos were being cropped and saved.

Next I was taken into another room with a desk, computer and 3 chairs. I was told to sit on the desk. The woman who took my photos booted the PC and logged me into my own website…and there were my boobs “on the Internet!”  My posture looked really bad.  I was a little annoyed my full frontal images were out there,  I had decided I wanted to take some before pictures myself, but I didn’t plan on posting any of them online.  Granted that office probably had a good firewall and security, but it took me a few weeks to feel comfortable with the whole situation.  I was told Dr Capraro would be in shortly, and I could look at some photos in a binder that showed before and after photos.  They also gave me a folder with my website portal access and some information about breast reconstruction.

I sat in the office waiting for my brain to catch up with what had just happened.  Again it felt surreal.  I cannot believe I have cancer and I’m in a plastic surgeons office, I thought.  I really did not want to be there.  I did not want to lose my boobs and have reconstructed ones, I wanted a magic wand to wave over me and make the cancer disappear.  But that was not going to happen, I needed to put my big girl pants on and deal with it.

I wasn’t particularly interested in getting too much detail about the process.  I wanted to know what was going to happen in an abbreviated form so I could mentally digest the whole concept.  I was sure that after I had absorbed the overview I could add another layer of detail.  The binder sat on the desk, I ignored it in defiance.  Ten minutes went by and I was getting a little bored.  I looked at my portal, it was pretty boring. I started to leaf through the binder and look at the poor deformed women’s chest. Single mastectomy and double mastectomy images with before and after.  Nipples removed with large scars covering overly inflated tissue expanders. It was quite horrific.  I felt for those poor women.

I had asked for a double mastectomy, but the visuals I had in my mind had omitted a small detail; the “during” images of partially reconstructed breasts with no nipples. It was quite shocking. Twenty minutes had gone by.  What the hell was this doctor thinking? I can go somewhere else! How rude to keep me waiting here.  I continued to look through the binder in more detail. I found one set showing a reconstructed nipple; it looked real!  The image before showed a very raw and painful nipple stitched together like a felt toy.  The 8 months later image was amazing.  The next image showed it tattooed.  It went from looking so natural to looking like a brown colored disc. I could live with the 8 month nipple, I don’t think I need a tattoo.

After a full 30 minutes the door opened and a tall man in a very nice suit walked in and shook my hand.  His physicians assistant followed with a laptop and sat next to me at the desk.  Dr Capraro went through a Powerpoint on the computer.  He showed me the surgical process, he marked up some of my images, he showed me some example implants.  He was very professional but showed no personality.  I found myself asking questions via the physicians assistant…she seemed very human.

He asked if I was planning on keeping my nipples, I said I hadn’t made my mind up yet.  He immediately reminded me that they were also considered breast tissue.  That’s okay, I saw what he could on that awesome nipple series. My nipples didn’t match because of uneven cysts…why not get some made that match!  But no tattoo; that ruined them.

I drove home in silence. No radio, no thoughts in my head. I was wiped out.

That night we went to Red Rocks to see the Violent Femmes and Bare Naked Ladies…life goes on. 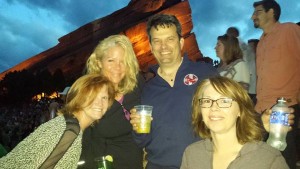