I ate ice cream last night and drank a lot of water.

I slept okay, it was a little interrupted, and I took pain meds a couple of times. I still have compression socks on too (I wish he’d done the liposuction on my thighs). I have slight twinges in the boob area but nothing compared to below my navel. Holy smokes, it hurts. I have a little bleeding at the incision where they took skin for the graft, and at my navel where they put the long wand thingy in to pull out fat to fill in a left boob crease. I won’t post that fun photo; if it creeps me out, its not for general publication.

I have renewed appreciation (and empathy) for people who have cesarians and hysterectomies, I can’t image the pain if muscles were involved.  I know I will recover pretty fast and just need to tough out the next few days.

Just above my pubes I have about an 8 inch incision where a 1.5 inch wide ellipse of skin was removed to make the areolas . I made a paper model to explain to Chris how they make nipples. The pattern for the donut is a silver dollar! Seriously, he drew round a silver dollar!

Circles are removed from the area of my breast where the nipple is to be places, and they make a T shape of skin that is rolled up to make make a cone with a lid.  The skin from my stomach is used to make 2 donut shapes, and together they make a nipple. 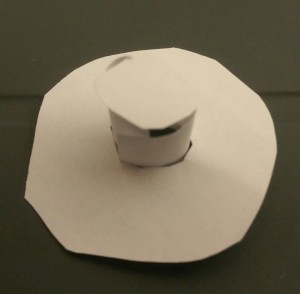 Pretty cool, huh?  Apparently the top hat will shrink over time and in 6-10 months they should look pretty realistic.  Now I am wrapped up for 5 days, so no peeking until Wednesday when I go in to get the stitches out.

I can get them tattooed later if I want. I’m undecided at this time, I’m not sure I need that much detail.  Though it I could have some fun with “You’ll never guess where my tattoos are?”

The big mastectomy operation and tissue expander/implant surgery pretty much killed all the nerves in that area so I don’t have much feeling or pain.  The main pain area is where they took skin and fat. The wand fanned down from my navel and has left everything below swollen and red with moderate burning pain.  I can’t help getting all Monty Python and keep telling myself ‘ tis just a flesh wound!.

I really tried hard not to take an oxycodone/acetaminophen pills today as I’m pretty sure they screwed up my sleeping after the mastectomy. I wanted to  save them for nighttime and see how a gram of Tylenol works (I’m allowed 4 grams a day). I managed on 2 grams of Tylenol and broke down at 5pm and needed a narcotic.  At least I was able to reduce my narcotic intake.  I’ll see how I do tomorrow.